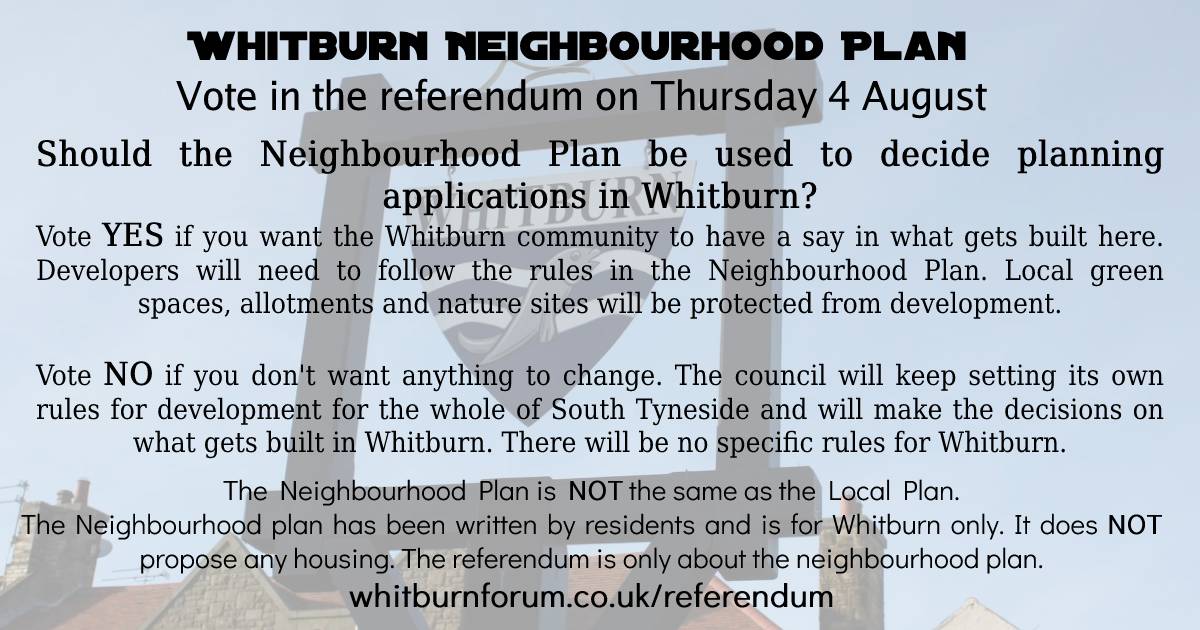 The Whitburn Neighbourhood Plan is now ready to be voted on by YOU (Whitburn residents) in a referendum.

The Plan is based on what you told us during consultation events, meetings and on social media. The plan contains new rules on for instance protecting local green spaces, local facilities and amenities and Whitburn's unique character as a coastal village surrounded by green fields.

The neighbourhood plan sets rules for Whitburn and is written by Whitburn residents. It does NOT propose to build any housing. It is NOT the local plan (which is done by the council and sets rules for all of South Tyneside).

So what will you be voting on?
The question asked is:
"Do you want South Tyneside Council to use the Neighbourhood Plan for Whitburn to help it decide planning applications in the neighbourhood area?"

If you vote YES, that means that developers will have to start following the rules in the Neighbourhood Plan whenever they propose to build something in Whitburn.

If you vote NO, that means that any proposals from developers will have to follow the current rules, such as the council's local plan. The current local plan was written in 2007, while the new local plan draft is just going through consultation now.

The polling stations are open on 4 August from 7am to 10pm at the following locations:
You can read a copy of the Plan in the Barnes Institue or on the council's website:
https://www.southtyneside.gov.uk/article/76062/Have-your-say-on-the-Whitburn-Neighbourhood-Plan#documents

More info on how and where to vote: www.southtyneside.gov.uk/article/76062/Have-your-say-on-the-Whitburn-Neighbourhood-Plan

You can download a poster here to spread the message.

Vote to have your voice heard!​